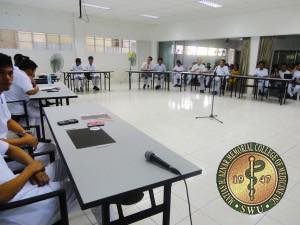 In the venue of AVR 5 & 6, the Literary Competition kicks off to an exciting start. Students crowded into their seats as the contests started off with the Quiz Bowl. In pairs, a heated battle of wits and logic brewed as questions ranging from Chemistry and Science to Mathematics and General Knowledge raged. In various difficulty, the students and audience were mentally challenged as they struggled to answer the preceding questions within the time limit.

Intermingled with extemporaneous speaking conducted by their own representatives, the speech competition was another bout of struggle as the contestants fumbled with their words to express their own ideas with only a mental preparation of five minutes. As our three participants Marvin Rey Andrew R. Pepino, Fritzie Marie L. Jala and Anne Maureen Melijor conveyed their opinions on difficult topics in an effort to claim victory. 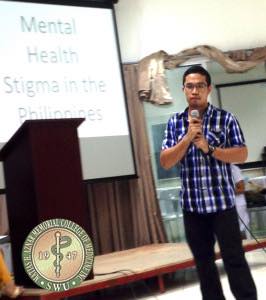 Our first candidate, Marvin Rey Andrew R. Pepino received the topic of Mental Health Stigma in the Philippines. This was relayed with honesty and conviction on his own experiences interning at a hospital in Davao. Fritzie Marie L. Jala, our second candidate was given the topic of Cryonics: Preserving the Dead. A most difficult subject matter in which she performed with aplomb relating her own beliefs in the subject with clarity and feeling. Finally, our last candidate, Anne Maureen Melijor with the topic of The Allocation in Budget concerning Health, showed great technical knowledge and focus for a speech with only five minutes of preparation. 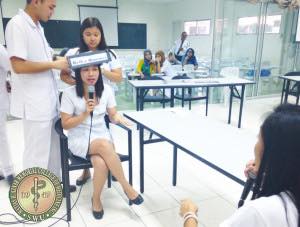 Ending these events was an uplifting game of Henyo by two teams of students. These teams were further divided into pairs which would be interchanged in succession between sessions. In a flurry of activity, both teams performed well in communicating with each other.

The House of Elixir supported all their representatives in a great example of support with banners and cheers. It may be that boost to their spirit which led to the results of the competitions. 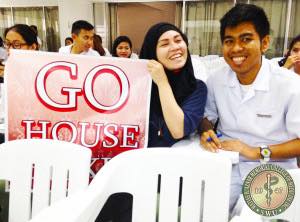 The winners for the Quiz Bowl are Kamaliya Jimit & Daniel Panaglima. Their quick thinking especially in the areas of Science and Math was commendable. They won by a large margin in comparison to the other pairs. Coming in second and third respectively are pairs Gianne Claude Embarte & Tuppila Nuttawut and Ryan Jelo Cardeno & Lloyd Eze. In Extemporaneous Speech, our winner is Marvin Rey Andrew R. Pepino. His words had deeper meaning and sincerity as he conveyed valid points from a first person perspective. The second runner up is our second candidate,  Fritzie Marie L. Jala.  She delivered concise beliefs with feeling and honesty. The third runner up was Anne Maureen Melijor, who impressed the judges with her technical knowledge and focused thoughts.
Last, our Henyo winners, Fe Aliana Serapio and Abigail Torres this pair represents the team and earned the most points. they had excellent communication skills and lightning quick answers.

That ends the Literary Contests which would then be followed by the MHAMurals sport competitions taking place the following day. Congratulations to our winners once again!