The first and only Filipino to make a contribution to the field of cytology, 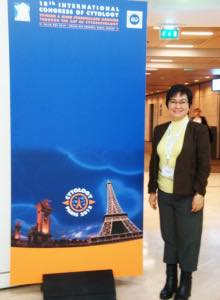 Dr. Annette Laurente Salillas, Professor  & Chairman of Anatomic and Clinical Pathology  Dept. of  Southwestern University – Matias H. Aznar Memorial College of Medicine will once again be standing majestically above the 240 heads of the most respected minds in Pathology and Laboratory Medicine during the 2014 Annual Meeting of the American Society for Clinical Pathology (ASCP) to be held in Tampa, Florida on October 8-10, 2014. Presenting her paper entitled “Hobnail Papillary Thyroid Carcinoma: Report of a Clinically Aggressive Variant”, this year’s meeting is themed  “BEYOND THE LAB” and dives deep into the latest innovations, current conditions and best practices in anatomic and clinical pathology. 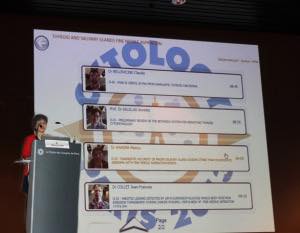 As member of the International Academy of Cytology since 1997, this is just one of a series of meetings where she globally represented the Philippines. In Paris, France she delivered the proffered paper entitled “Preliminary Review of the Bethesda System for Reporting Thyroid Cytopathology: A local study in Bohol Island, Philippines” in last year’s 18th International Cytology Congress. “Toward a more personalized medicine through the art of cytopathology” was the theme of the said event participated by 1,200 delegates from 80 countries as an exchange platform for cytopathologists, cytotechnologists and other professions sharing the same objective but coming from different countries with variety of backgrounds. The congress reflected the growing importance of Cytopathology in the world. 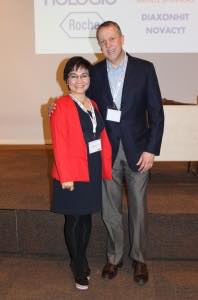 She also presented in other notable international meetings such as the International Cytology Congress (ICC) in 2004 in Santiago, Chile; European Cytology Congress (ECC) in 2005 in  Paris, France; WASPaLM/RCPA Congress in 2009, Sydney, Australia and the International Academy of Pathology (IAP) Congress in 2012, Capetown, South Africa papers related to “Fine Needle Aspiration Biopsy” popularly called FNAB, which she introduced here in Cebu and Bohol and is advocating it as a Simple, Accurate, Fast and Economical (SAFE) way of diagnosing tumors and non-neoplastic lesions. With her expertise and passion in the field, clinicians and patients alike have reaped, are reaping, and will continue to reap the harvest of her work.

It is due to being a “cell-lover” that she was able to make these several contributions in cytology. Thus was awarded in February 22, 2006 as one of the Outstanding Individual Award in the field of medicine by the City of Cebu.

She is an Interventional Cytopathologist, Anatomic/Clinical Pathologist and a Professor, and believes that she not only imparts her knowledge and experience to her students but also setting herself as a role model and inspiration for them being future physicians.

Featured in Cebu Daily News
Also found on their Website